What colour is a Pyrenean Mountain Dog?

When many people think of Pyrenean Mountain Dogs, they think of a white dog. Essentially this is right as a Pyrenean must always be principally a white dog. Pyreneans, however, can be either all white or white with patches of badger (which the French call blaireau), wolf grey, paler shades of lemon, orange (traditionally called arrouye) or tan.

These colour patches may be on the head, ears or base of the tail, with a few permissible on the body.  In general these markings should not cover more than one third of the dogs body in total and are usually a lot less.

When puppies are born, their markings may appear darker. As they grow however, while some will stay darker on some dogs, many of these markings will fade.  When fully grown, some Pyreneans with markings will look almost all white, with only very soft, light markings visible, often on the ears.

Can a Pyrenean have black markings?

The short answer to this question is no.  A purebred Pyrenean can not have black markings.

Black is a colour which is not known in the Pyrenean Mountain Dog gene pool and there have been no verified examples of registered Pyreneans (Pyrs which have a verified and traceable family tree) with black markings which go from the tip of the hair all the way to the root.  Black markings are different to badger markings (caused by the agouti gene) where the tips of the hair can look black, but the hair is banded and of a much lighter colour closest to the skin.

Around the period of the First World War, the breed was reduced significantly in numbers in the Pyrenees. As a result, an effort was made by those who knew and loved the breed to ensure its continuation as it had been for many thousands of years.  To do this a breed standard was created which drew significantly on what the shepherds in the Pyrenees mountains considered to be a correct Pyrenean. For example, the requirement for the breed to have double dew claws on the hind legs, for the dog to 'make the wheel' with its tail when alert and that badger markings on the head and a patch of the same colour on the base of the tail (with the rest of the dog all white) was considered to be "U ca pla p'apat" (which means a well or nicely marked dog in the dialect of Labeda).

Dogs with black markings were considered to be crossbred by the shepherds and not the 'true breed', so this fact was specifically made note of.  A standard developed in France in 1907 states the following (which I have translated from the French):

"Defects: ...White with red or black spots denoting the junction with the St. Bernard or Newfoundland (black hair is strictly prohibited, but it is appropriate not to confuse black hair with badger hair colouring)"

The first official standard for the breed in France (developed in the 1920's and published in 1927) says the following about colour:

"White or white with spots; colour of a badger or pale yellow or wolf grey on the head, the ears and at the base of the tail. Spots of the badger are esteemed the most.  One or two spots on the body are not considered faults"

Under the heading of "Faults" the 1927 French standard includes "other colours than those mentioned above denoting crossing".

While there are some that may claim to have Pyreneans with black markings, in all cases I have ever come across these dogs are not registered and have no true verifiable pedigree.  The origin of the black markings on dogs claimed to be 'pure' Pyrenean may vary. Often they may be crossed with dogs such as Border Collies or Cattle Dogs, so if someone has black marked or heavily ticked pups or dogs for sale it my pay to look at what other dogs they have around the property too. In some it is possible that they are the result of dogs that were crossed with Pyrenean Mastiffs or Newfoundlands.  The Pyrenean Mastiff is another livestock guardian breed which is heavier in type than the Pyrenean Mountain Dog and originates mostly on the Spanish side of the Pyrenees mountains.  You can see the two different breeds on the French Pyrenean breeds club website.

Here is a link to some pictures of Pyrenean Mountain Dogs on the French breed club website; and

Here is a link to some pictures of Pyrenean Mastiffs on the same website so you can compare the two.

The Pyrenean Mastiff may occasionally have black markings and it is a permitted colour in the breed standard for that breed. It is possible that some dogs sourced from farms in the Pyrenees mountains and taken to places such as the US have been a cross of these two types of dogs.  Bottom line though is that a dog with black markings that go to the root of the hairs will not be a purebred Pyr. There is therefore no real guarantee that it will act like a Pyr is supposed to act (and may potentially have traits that are completely opposite to those desired in a livestock guardian breed). The shepherds in the Pyrenees did not want the crosses for a very good reason as livestock guardians with the traits of other breeds (such as a herding dogs willingness to chase stock or breeds with less instinct to protect a flock and stay with them) were a liability rather than an asset. 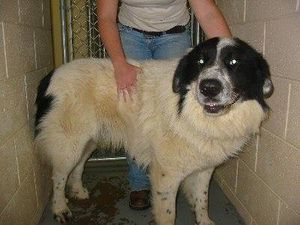 Photo above: an example of a Pyrenean cross showing black patches and some ticking on the legs

What about in Australia?

It is important to note that Pyrenean Mountain Dogs in Australia could not and have not been crossed with a Pyrenean Mastiff.  While there have been a small number of Pyrenean Mastiffs in Australia, none of the dogs imported to or bred in this country have carried the gene for black markings and none have ever been crossed with Pyreneans as the lines have been strictly controlled.  In addition, no breeder of registered Pyreneans in Australia has EVER imported or bred a dog with black patches (and the law of averages tells us that if the colour existed in the breed here, they should have produced at least one at some point). The only place that black markings in 'Pyreneans' could have eventuated from in dogs located in Australia is through crossing (either accidental or otherwise) at some point with another breed that was not a Pyrenean (noting that a bitch may mate and have puppies in the same litter which are the offspring of more than one dog). One of the most likely sources of black markings in Australia - i.e. black patches and/or dark ticking in the white parts of the coat - is from breeds such as the Border Collie or Australian Cattle Dog. These breeds are the ones most commonly found on properties where livestock guardians may also be, and are also known to produce the types of markings often displayed on so-called black marked 'Pyreneans'.