DNA test results are back from Pawprint Genetics for Missy (Espinay Cest la Vie).  She is Normal (Clear) for Degenerative Myelopathy, Glanzmann's Thrombasthenia, and Canine Multifocal Retinopathy 1.  She is also officially 'clear by parentage' for Neuronal Degeneration. 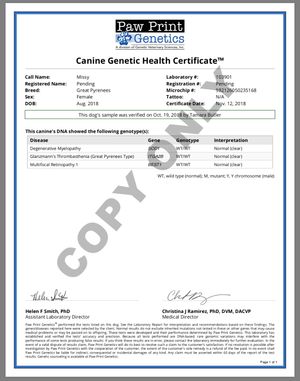 On 06 July 18, Nena (CH Espinay Albine (AI) and our Saluki Sookie (CH Alshira la Sylphide (AI) JC) attended a heart clinic in Canberra with a veterinary cardiac specialist where they underwent an Echocardiogram.  We are pleased to say both girls are now certified as having no echocardiographic evidence of cardiac disease.

Hugo also attended the clinic on 07 July 18.  As he is still young, he only had a preliminary check via Auscultation (he will undergo an Echocardiogram when he is older).  He was also cleared with no auscultory evidence of cardiac disease.

Our dogs generally undergo heart testing every couple of years throughout their lifetime.  This helps us monitor for any changes, particularly as Pyreneans can be subject to later onset heart conditions such as Dilated Cardiomyopathy.  You can read more about some of the heart conditions in the breed on our Health page. 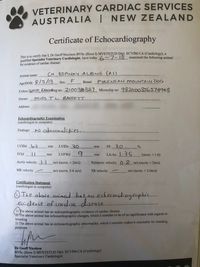 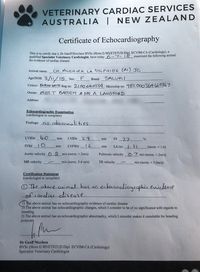 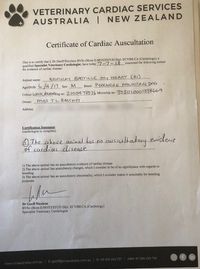 I am very pleased with these results.  While both Grace and Louise have had clear heart tests previously (I generally test dogs every 2 years).  Checking their hearts as they age is also important, as some heart conditions (such as Dilated Cardiomyopathy) may not be evident until later in their life.

On 23 June 2014, I attended an eye clinic in Yass with visiting veterinary eye specialist Dr Bruce Robertson.  Grace, Louise and Nena all had their eyes checked under the ACES eye scheme.  While Grace, who is 8 1/2, has some lens sclerosis which is typical of dogs her age, all were declared healthy and cleared of genetic eye issues.

Also on eyes, B-Litter puppies Hugo, Pocket and Georgie have been DNA tested for Canine Multifocal Retinopathy (CMR1) and all are clear/normal.

Recognition from the Great Pyrenees Club of America

(27 March 2017)  Look what arrived in the Post today.  A certificate from the Great Pyrenees Club of America for Azure (Ch Espinay Azun) in recognition of the health testing that has been done for him.  Azure now joins Nena, Hamish, Grace and Louise who also have similar awards. 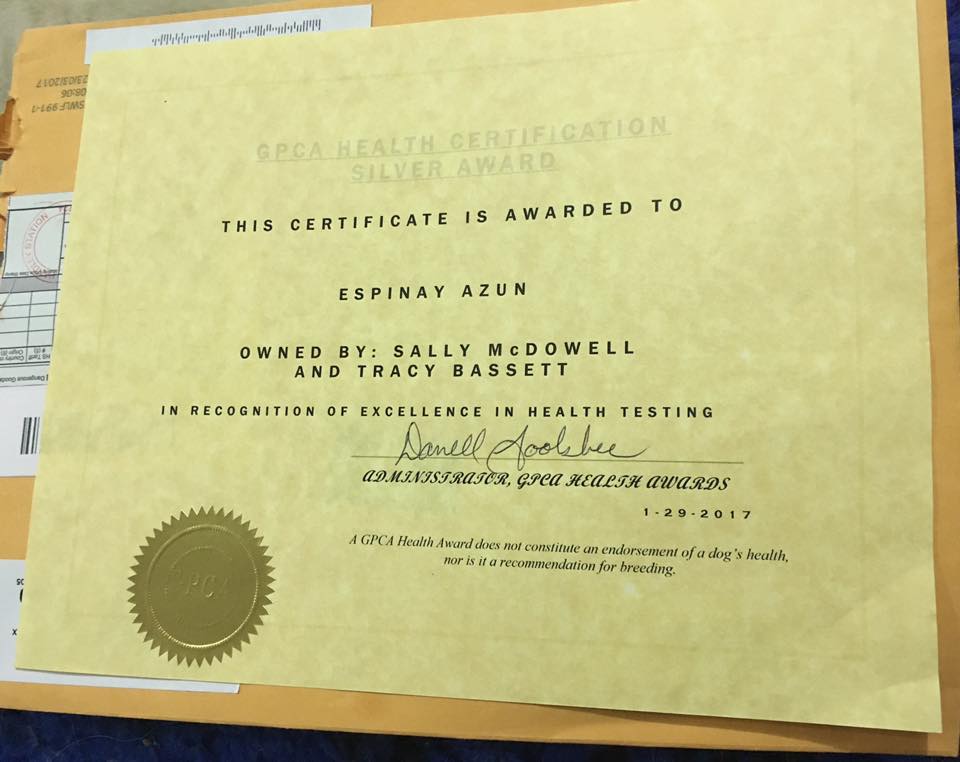 News from Faye Cartledge who owns 'Red' (Champion Espinay Assouste) that she now has the health testing results for Red's Hips, Elbows and Patellas.

Red's scores are Hips 1:1, Elbows 0:0 and Patellas Normal. I am very happy with these fantastic scores.

For more information on hip, elbow and patella scoring and conditions, visit our Health Issues page, which can be found by clicking the link or under 'About the Breed' in the top bar.

You can also see photos and read more information about Red, who is from our A litter, on her page here.

On 05 November 2016, Hamish and Nena attended a heart clinic in Canberra with Dr Niek Beijerink DVM PhD Dipl. ECVIM-CA (Cardiology) from the University of Sydney.

Nena's heart was found to be clear on auscultation with no evidence of heart disease.

Hamish had an echocardiogram performed to check the progress of his asymptomatic Dilated Cardiomyopathy (DCM).  This condition was discovered by Niek during Hamish's heart exam in 2014.  We were pleased to find that Hamish's condition is stable with no further development.

Our dogs generally attend heart clinics every 2 to 3 years. I consider continued testing as our dogs age to be important as some conditions, such as DCM, tend to have a late onset and may not be present in earlier examinations.  You can read more information on the main heart conditions which may be found in Pyrs on my Health Issues page. 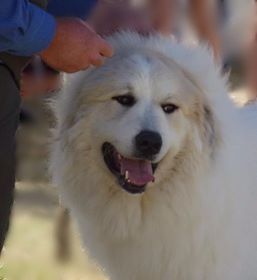 When it comes to health testing, I like if possible and practical to have results for more than just those dogs we plan to breed from.  This helps us have a better picture of the gene pool and the dogs in it.  This is also one of the reasons I place great importance on keeping in touch with the owners of our puppies for the whole of the dogs life.  Pet dogs and their owners are an important part of what we do as breeders.

This week while BJ (Neuter Champion Espinay Arrens) was at his annual veterinary health exam, his owner Gary had his vet do a patella examination to check for any patella luxation, and fill out the examination form for submission to OFA.  I am happy to say that BJ's patellas are normal.

Many thanks to Gary for helping me out by getting the testing done.

8 June 2016.  Azure (Ch Espinay Azun) has now had his hip and elbow x-rays and scoring completed.  I am pleased to say his results have come back as 1:3 for hips and 0:0 for elbows.  His hip score is roughly equivalent to an OFA Excellent or FCI grade A1.  His elbow score means they are normal with no sign of any abnormalities.

Azure has also had his veterinary examination and scoring done for his patellas (knees) in accordance with the OFA patella scoring scheme.  He has been given a score of Normal.

For more information on hip, elbow and patella scoring and conditions, visit our Health Issues page, which can be found by clicking the link or under 'About the Breed' in the top bar.

Neuronal Degeneration is a lethal condition which causes widespread degeneration in both the central and peripheral nervous systems. It causes symptoms such as muscular weakness and ataxia in the rear.  They may also develop laryngeal paralysis. It first appears in pups at around 4 to 6 months of age and is a degenerative condition which means dogs who have the condition slowly get worse over time. The gene for Neuronal Degeneration is inherited in an autosomal recessive manner, which means dogs need two copies of the gene to be affected by the condition.  Dogs with one copy of the gene will not be affected, but will be able to pass the gene to their offspring. Testing enables those dogs identified as carriers (having one copy of the gene and one normal gene) to be bred to dogs identified as clear (having two normal genes) so that they do not produce puppies that are affected by Neuronal Degeneration and can safely remain in the gene pool.  With careful breeding policies it is hoped that no more affected Pyreneans will be produced.